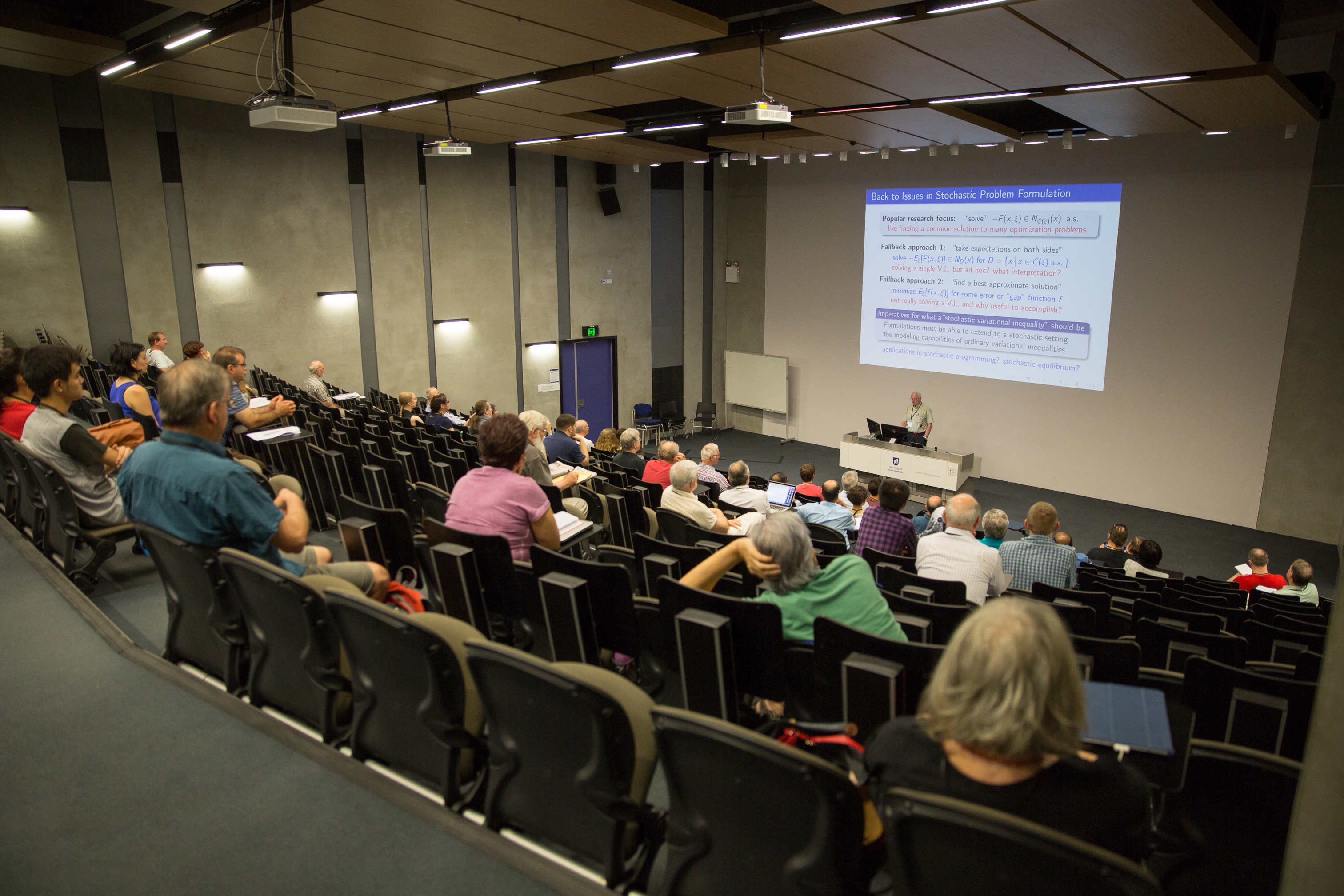 This was the fourth edition of the successful South Pacific meetings, following the 2005 and 2010 South Pacific Conferences in Mathematics (SPCM) in Noumea, New Caledonia, and the 2013 South Pacific Optimisation Meeting (SPOM 2013) in Newcastle, Australia. SPCOM 2015 offered a rich scientific program targeted to suit the diversity of attendees from early career to senior researchers. The topics included variational analysis, optimal control theory, convex analysis, numerical optimisation, vector optimisation, stochastic optimisation, functional analysis, and their applications.The meeting started with two tutorials on Sunday 8 February, one in the morning and one in the afternoon. José Mario Martínez delivered the morning tutorial, which was on numerical smooth optimisation. The afternoon tutorial was on numerical non-smooth optimisation, delivered by Claudia Sagastizábal. Both tutorials were free of charge for all registered participants and were indeed very well attended (by 20–25 participants).

Terry Rockafellar, a world leader in convex analysis and optimisation, gave a stellar opening talk showing how Stochastic Variational Inequalities can provide the right framework for studying problems of optimisation and equilibrium in a stochastic setting.

Running over four days, the event included 12 plenary talks, 31 invited talks, and 2 contributed talks. PhD students also had the opportunity to showcase their research and find out more about their peers’ research in a poster session. Breakthrough presentations included Radu Bot¸’s talk illustrating how duality can be exploited for solving complexly structured nonsmooth optimisation problems; Asen Dontchev’s address on Lipschitz stability in variational analysis; José Mario Martínez’s presentation of new results on optimality conditions for constrained optimisation; and a presentation on first-and second-order necessary conditions for nonlinear programming problems from the viewpoint of exact penalty functions by Xiaoqi Yang. Boris Mordukhovich also impressed with his introduction to a new co-derivative characterisation of maximal monotonicity.

The Fitzpatrick Workshop celebrated the 25th anniversary of the publication of a seminal paper on maximal monotone operators by the late Australian mathematician Simon Fitzpatrick. Fitzpatrick’s paper introduced a key tool in functional analysis, with important implications in mathematical optimisation. An objective of this workshop was to understand, after a quarter of a century, what open questions posed in this paper have been solved, and what questions remain open. Stephen Simons gave a keynote talk on Fitzpatrick’s contributions to Functional Analysis, introducing a new theoretical framework, which gives a generalisation of Brezis-Browder theorem on linear relations. Most of the results Simons presented are consequences of Simon Fitzpatrick’s seminal 1988 paper. Simons’ fascinating talk was followed by four 20-minute presentations, given by Adly, Borwein, Bot¸, and Burachik.

Social events included the joyfully celebrated Terry Rockafellar’s 80th birthday on Tuesday during the meeting banquet and a Wineries Tour to McLaren Vale. SIAM and Springer supported the meeting by sending hard copies of books authored by the SPCOM speakers. These books were displayed on desks during the meeting, and then distributed to the students on the last day of the meeting. SIAM made three of these books available electronically, which were given to students as gifts.