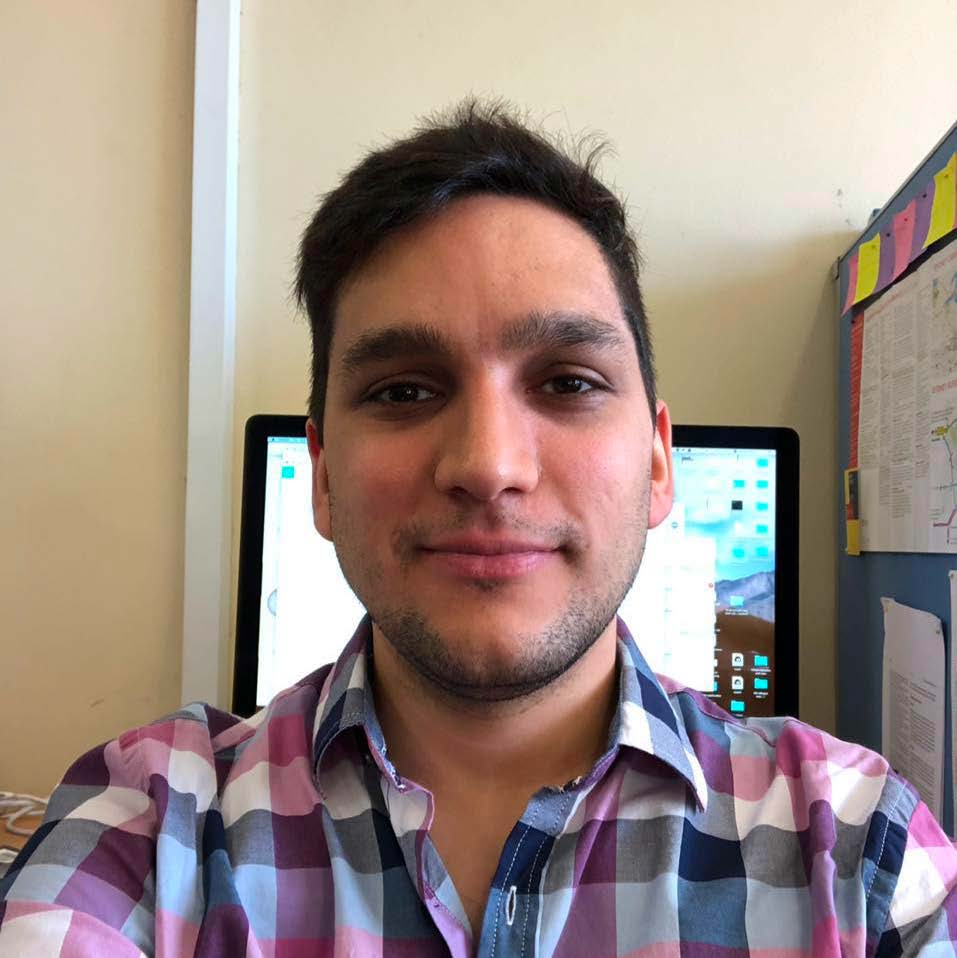 The University of Sydney

Gaston Burrull is in the final stage of completing his Ph.D. at The University of Sydney under the supervision of Professor Geordie Williamson. He started a Postdoctoral Fellowship at the Hebrew University of Jerusalem under the supervision of Professor David Kazhdan. His research interests include combinatorics of Schubert varieties and Kazhdan-Lusztig polynomials with a particular interest in Lusztig-Dyer’s combinatorial invariance conjecture.

Can you give me a quick overview of the type of mathematics you are studying and its potential impacts for the broader community ?

We are interested in groups. Groups are symmetries, symmetries are fundamental in the universe. For example, by Noether’s theorem symmetries are associated with laws of conservation (of energy, momentum, angular momentum, etc). It is important to have a “periodic table” for groups, since every group admits a decomposition (by quotients) into “atoms” (or“elements”) which are the simple groups. Finite simple groups of Lie type area kind of “atoms” which are easier to study because they have the additional structure of a manifold. The representation theory of Lie groups deals with general Lie groups through actions on vector spaces. The motto is the following: “Representation theory is taking something very abstract and complicated and then doing linear algebra with it because linear algebra is easier to understand”.

How did you get into mathematics and into the area of Representation Theory? Was there someone or something that inspired you to this field?

I was initially interested in theoretical physics. In 2009, I enrolled in Physics at the Pontificia Universidad Catolica in Santiago. In my final year, I decided to enrol in pure mathematics. The Galois theory course given by Erdal Emsiz
grew my interest in algebra. I attended a Galoisian Cohomology course in Talca given by the retired professor Ricardo Baeza who recommended I contact Nicolas Libedinsky. In 2018, I finished my master’s coursework under Nicolas’s supervision who introduced me to the Kazhdan-Lusztig theory and Soergel bimodules theory.

You received a grant to attend AMSI Winter School 2022. How important was this in terms of your ability to attend, fully participate in the program and meet others studying in similar fields?

Extremely important, this is the first school I ever attended during my Ph.D.This was a great opportunity to socialise with a large number of students and work on exercises together, which is not a very common practice in other
conferences.

Winter School is designed to give students a deeper understanding of their area of research and expose them to others working in different fields/industries. What was the most valuable part of the program for you? Was it the course content or the people you met? Do you have new ideas for your work/research or see it in a new light?

The courses and exercises were very important to me. The learning factor of this school was very strong. I was able to relearn Kazhdan-Lusztig theory and learn from scratch the basics of reductive groups I had no opportunity to
learn before this school.

AMSI-MSRI Winter School was held as a hybrid event with event hubs in Australia and America. What was the biggest positive from your point of view holding it in this format and/or the biggest challenge?

Interacting with people in America was very challenging. Interacting face to face is much easier, especially after having a couple of years having purely interactions via Zoom.

What advice would you give to someone who is considering applying for Winter School in 2023? How would you describe the conference tothem? Should they apply and why?

Having a school to attend during your postgraduate is a very rare and extremely valuable opportunity. In a postgrad, you have to learn the majority of things on your own, and sometimes have to focus on research and postpone the proper learning of a subject. In a school, you have the chance to learn things 10 times faster and interact with a lot of people wanting to learn the same things as you. Representation theory is very difficult to learn because there is so much background to learn, and there is no way to learn all alone. You should not ignore opportunities like this and apply to every school announced, AMSI, or similar.

Where do you want the mathematical sciences to take you? Where do
you see yourself in five, ten years time?

In 5 years I hope to be back in chile with a postdoctoral or a tenure-track position. In 10 years I hope to have a partner, maybe a family, and a stable job either in academia or in the industry.

Any other feedback/comments you would like to provide on the AMSI
Scholarship or AMSI-MSRI Winter School 2022?

I would be happy if there were more instances like this. Also, I would have been very happy to have this school when I started my Ph.D. back in 2018. I cannot complain about any aspect of this school.