Some of us were skeptical going into the conference. No doubt it was a good opportunity, but would it really “inspire”, could it really change our outlook? Well, once at the HLF it was hard not to get caught up in the excitement – even when hearing about work outside our fields.

It is fair to say that the four of us felt like we did not know much about the Laureates before attending the conference. But we were all soon to learn just how impressive the Laureates impacts on their fields have been (and really their impact on the world). It is no exaggeration. We had the chance to meet Vint Cerf who was pivotal in creating the internet, and Ivan Sutherland who we can thank for computer graphics, the GUI interface, and for virtual reality. David asked these Turing award winners if they had any idea how important their work would be at the time they were doing it. Both of them shook their heads and said they just worked on what they thought was interesting or important at the time. The presence of these humble and impressive Laureates made us feel as though anything is possible.

Each day there were leisurely lunches, and incredible dinners. These social events were a key part of the HLF program, and were designed such that we usually found ourselves at a table with a Laureate. Tian reflected, “I shared very nice conversations with the Turing Award winner Raj Reddy on many connections between mathematics and computer science. I also had the opportunity to sit with Fields Medalist as well as Abel Prize winner Sir Michael Atiyah twice at the dinner table, and hear about many of his interesting ideas about mathematics and life in general. Apart from that, I also chatted with Nobel Prize winner Brian Schmidt from ANU during our Speyer City tour in Germany, and I found his project on women in science and mathematics is absolutely adorable.”

A question we all had before the conference was would the Laureates talks be comprehensible? We can now report, the answer is a resounding yes. The Laureates talks were genuinely inspiring and informative. Bao shared that he was “especially motivated by Andrew Wiles’ story of solving Fermat’s Last Theorem, encouraging me to think again about a problem that I have almost given up.” And Tian found “the talk by Sir Andrew Wiles on Fermat’s Last Theorem was beautifully delivered, also the talk by Fields Medalist Vladimir Voevodsky has given me some ideas on one of the research problem I came across recently.”

Mark best summarises our experience of the HLF, “The [final] dinner was held inside the Heidelberger Schloss, a castle overlooking the city of Heidelberg. I had the good fortune to be sitting at a table with Sir Michael Atiyah for dinner. Having dinner (and discussing complex geometry) with an actual knight, inside an actual castle, is an experience I won’t soon forget.”

The Heidelberg Laureate Forum is an annual event, and the 5th event will be held from 24 – 29 September 2017. The application round for the 2017 event closes on 14 February 2017. For more information, please visit the HLF website at www.heidelberg-laureate-forum.org. 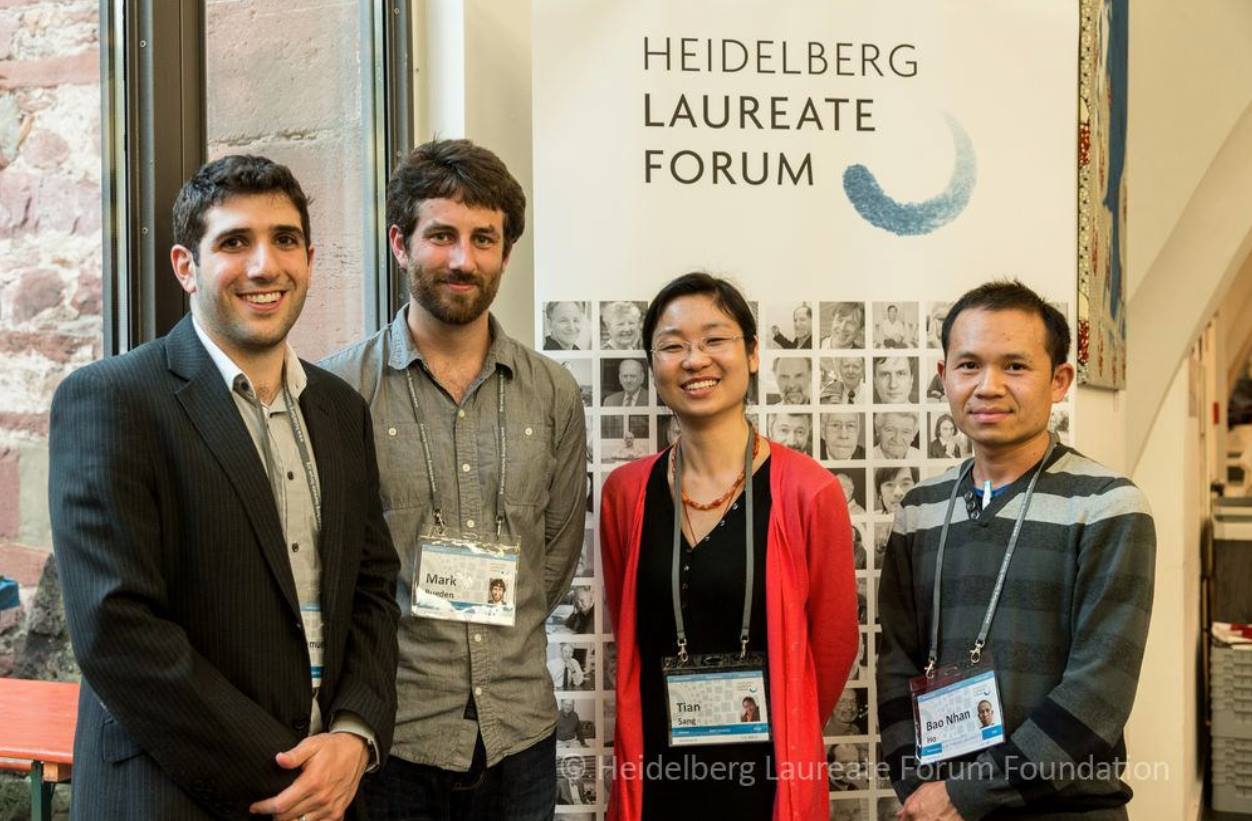