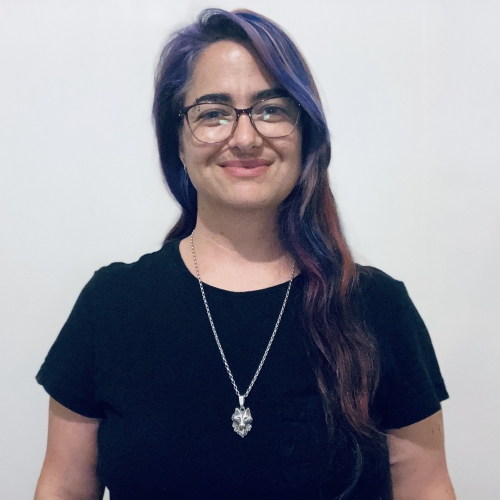 Monica Seeber is an aspiring polymath and has a Bachelor of Arts (honours) majoring in philosophy from The University of Western Australia and a Master of Arts in professional writing from Deakin University. She is in her final semester of the Bachelor of Science at Murdoch University, majoring in mathematics and statistics with a secondary major in philosophy.
Her research interests include mathematical realism, models of time, and folk philosophy – that is, philosophical ideas proposed by non-academics who aren’t explicitly trying to “do philosophy”. As a professional writer Monica specialises in proofreading technical documents and translating texts into Plain English. She enjoys all fields of mathematics, including statistics, but is especially fond of calculus and its applications.
Monica is eager to pursue interdisciplinary postgraduate research in mathematics and philosophy, investigating how philosophy of mathematics influences individual and social attitudes about mathematics.

My research focus is on the philosophy of mathematics and the assumptions hidden behind our approach to learning, teaching and applying mathematics.

I want to create a new field map of mathematics that is organised around the subject of mathematics: people. This field map would visualise mathematics as it exists in the human world – how it is learned, applied, and investigated – explicitly within the context of the humans practicing mathematics. It would traverse human cognition, perception and bodily experience, mental and physical environments, and personal and social practices.

My hope is that this new perspective of mathematics will enable people to see mathematics as a dynamic social enterprise that anybody can understand and everybody can appreciate.

How did you get into the mathematical sciences?

After my philosophy degree, I spent some time working as a digital copywriter. The internet is driven by numbers, and IP addresses are only the beginning. User metrics, audience demographics, and return on investment are all numbers and I – a copywriter – was swimming in them. I wasn’t just writing words, I was collecting statistics, analysing algorithms, and optimising publishing schedules. I thought breaking down statistics was fascinating; maximising search engine rankings was interesting; and coordinating the logistics of digital content production was fun. I was doing maths! And I liked it! I wanted to know more about the maths behind the work I was doing so, naturally, I enrolled in a mathematics degree.

What advice would you give to your younger self or others wanting to studying the mathematical sciences?

Mathematics is like football. You go to training and the coach makes you run laps and perform drills and tells you to go home and practice your ball skills every day. It’s repetitive and mostly boring. But then it’s gameday and you run onto the field and – without thinking – apply all those skills you honed at training. On a good day you win the match, on a bad day you commiserate with your team and say, “at least we had fun”.

Mathematics at school (primary and secondary) is training. Tertiary mathematics is game day. After secondary school is when math really gets fun and you can apply the skills and knowledge you spend over a decade learning and practicing.

Don’t waste that decade of training: play the game. You won’t regret it.

I would not have been able to attend without the scholarship.

Where do you want the mathematical sciences to take you? Where do you see yourself in five or ten years’ time?

I want to work in research and academia, particularly in the intersection of mathematics and philosophy. After I revolutionise the philosophy of mathematics I’d really like to figure out the meaning of 0÷0.