Professor Kate Smith-Miles, The University of Melbourne and OPTIMA 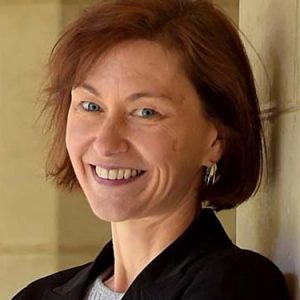 The University of Melbourne and OPTIMA

Kate Smith-Miles is a Melbourne Laureate Professor of Applied Mathematics in the School of Mathematics and Statistics at The University of Melbourne, and Director of the ARC Industrial Transformation Training Centre for Optimisation Technologies, Integrated Methodologies and Applications (OPTIMA). She is also Associate Dean (Enterprise and Innovation) for the Faculty of Science at The University of Melbourne.

Prior to joining The University of Melbourne in September 2017, she was Professor of Applied Mathematics at Monash University, Head of the School of Mathematical Sciences (2009-2014), and inaugural Director of the Monash Academy for Cross & Interdisciplinary Mathematical Applications (MAXIMA) from 2013-2017. Previous roles include President of the Australian Mathematical Society (2016-2018), and membership of the Australian Research Council College of Experts (2017-2019).

Kate obtained a B.Sc(Hons) in Mathematics and a Ph.D. in Electrical Engineering, both from The University of Melbourne. Commencing her academic career in 1996, she has published 2 books on neural networks and data mining, and over 280 refereed journal and international conference papers in the areas of neural networks, optimisation, data mining, and various applied mathematics topics. She has supervised 29 PhD students to completion, and has been awarded over AUD$20 million in competitive grants, including 13 Australian Research Council grants and industry awards. She was awarded a Georgina Sweet Australian Laureate Fellowship from the Australian Research Council (2014-2020), enabling her Instance Space Analysis methodology to be expanded into an online tool (MATILDA, Melbourne Algorithm Test Instance Library with Data Analytics).

Kate was elected Fellow of the Institute of Engineers Australia (FIEAust) in 2006, and Fellow of the Australian Mathematical Society (FAustMS) in 2008. Awards include: the Australian Mathematical Society Medal in 2010 for distinguished research; the EO Tuck Medal from ANZIAM in 2017 for outstanding research and distinguished service; the Ren Potts Medal for outstanding research in the theory and practice of operations research from the Australian Society for Operations Research (ASOR) in 2019; and the Monash University Vice-Chancellor’s Award for Excellence in Postgraduate Supervision in 2012.

In addition to her academic activities, she also regularly act as a consultant to industry in the areas of optimisation, data mining, and intelligent systems. She is also actively involved in mentoring, particularly with the aim of encouraging greater female participation in mathematics, and she chairs the Advisory Board for the AMSI Choose Maths program.